Carb Tracker allows users to track their nutrition in order to reach their health goals. The original idea for the app was to build a tool to help users manage their diet based on The Primal Blueprint Carbohydrate Curve. Users are able to add foods, create recipes, and log their food consumption. Total nutrition statics are provided to help users understand their total consumption. The Nutrition Ix API was used to allow users to search for foods and automatically receive nutrition data when creating recipes.

Carb Tracker uses the Ruby on Rails web development framework. The project was created for the Flatiron School’s Online Web Developer Program. Here is an overview of the process for creating the web app. 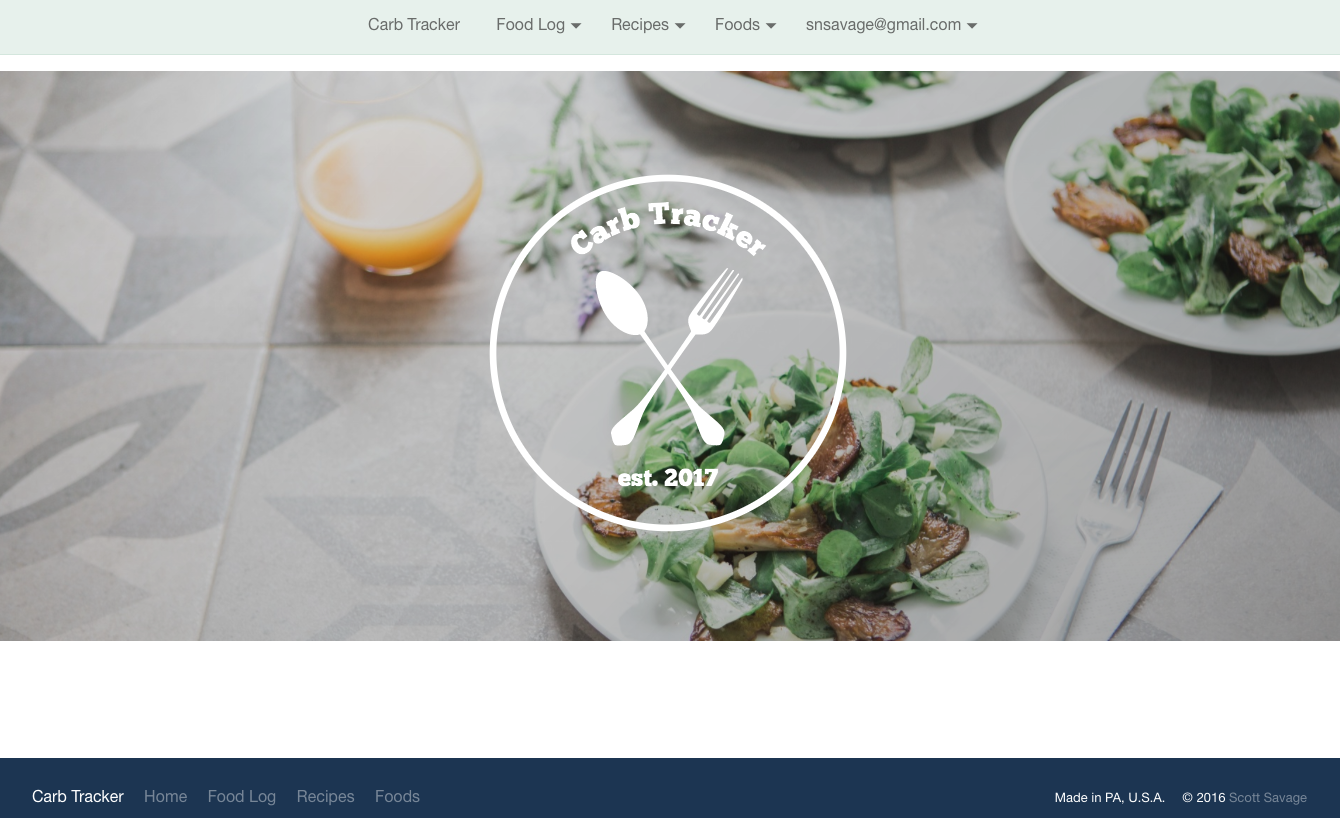 This project was completed as part of the Flatiron School’s Online Web Developer program. Accordingly, the app was required to use a few different features of the Rails framework. Some of these requirements included at least one many-to-many model relationship, nested forms, user authentication, and a nested resource.

One of the problems when building these student projects is the balance between creating a project purely for learning purposes and creating a usable “real world” project. Having good data to work with can really help to create a more realistic final project. For Carb Tracker, I wanted the user to be able to search for foods and to be able to get back nutrition information for those foods.

To achieve this feature, I settled on using the Nutrition Ix API. There are a lot of food nutrition APIs that are available, but I settled on the Nutrition Ix for one particular reason. The API has an endpoint for natural language searching. This allows the end user describe the food with a phrase like “1 large apple” or “1 cup flour”. The API will interpret that language and return nutrition information based on the food and quantity provided. Using this feature of the API greatly simplified the programming for Carb Tracker, by reducing requirements around handling different food quantities and measurements.

Unlike my previous project that had a well written and comprehensive Ruby wrapper library for their API, the Nutrition Ix libraries were not well suited to this project. To solve this problem, I created a NutritionIx class with the HTTParty gem to handle calls to the api. The following code in an abbreviated version of the class.

To use this class a new instance is created with a search term and then the foods method is called. For example, NutritionIx.new("1 apple").foods.

Most of the Carb Tracker app followed a normal CRUD design pattern and fit nicely into the Rails framework. However, one page was a little unusual and caused some problems.

In order for a user to track the foods they’ve consumed, I wanted them to be able to create recipes. With this app foods are logged by logging recipes. That way a user can log both a single food (just a recipe with one food) or a more complex recipe. In order to achieve this goal, the form to create a recipe became fairly complex. The RecipesController#create action, which processes that form, is shown below.

Searching for new foods (shown above) was one of the first features added to this form. Users can add their search terms and click on the search button. This calls the API through the NutritionIx class discussed either, saves those foods to the database, and then renders the form.

The form is processed this way by the above #create method when the form has a search :commit param. The call to Food.find_or_create_from_api ensures that no duplicate foods are created and is written to handle the data from the NutritionIx class.

The Cocoon gem was used to add some nice JavaScript interaction to the form. Using Cocoon allowed me to create dynamic fields for the foods and ingredients. This allows the end-user to add and remove those nested field values. The alternative would have been allowing only one of each or a certain preset number.

The solution was to filter ingredients without a food_id from being displayed the form as shown above. However, I’m not very happy with that solution and in the future I might change out the current process into a form object.

One of the more complex problems that I encountered while working on Carb Tracker was how to handle nutrition statistics. In order for users to track how many carbs they were consuming each day, the app needed a way to sum all of the foods in each recipe that was logged for a given day. There was additional complex around quantities that were added on the join tables between recipe and food, as well as log and recipe. After trying to use ActiveRecord for these queries I turned to a different solution.

Using Scenic allowed me to use the SQL queries that I knew worked along with ActiveRecord and migrations. The SQL query for recipe nutrition statistics is shown above. The SQL above is for the Stat table and adjusts the nutrition information for each ingredient in a recipe by the ingredient.quantity and recipe.serving_size.

The beauty of this approach is that it allows you to use your database view as an ActiveRecord model, as shown above. The Stat model is just a representation of the SQL. Nothing extra is stored in the database, but the SQL query. This same process was repeated to create the total nutrition statistics for the logs.

On a previous project, I used the CanCanCan gem to handle user authorization. So for this project I turned to Pundit to better understand Pundit’s approach. The code above shows the policy class for Recipe. I found using Pundit to be much more straight forward then using CanCanCan. Pundit has less of the “magic”. As shown above it’s just a simple Ruby class without a DSL. I will certainly use this gem in the future.

As compared to my previous Sinatra project, working with Rails was a huge benefit. When I created the PhotoVistas project with Sinatra, so much of the battle was getting all of the “Rails like” features that I needed to create a complete web app. With this project, much more of my energy was spend on the actually creating the app.

While, the project definitely lacks some usability and polish that I would have liked to see I’m pleased with the results. Since working on my last Rails project back in 2015, I know that I have certainly come a long way as a developer. I understand what Rails is during the background much better and I am much more confident as a Ruby developer. The Carb Tracker project allowed me to use some new gems, improve my skills with using APIs, and further my understanding of Rails. Overall a success!

The code for this project can be found on GitHub.